Spartan Ocean Racing is based in Nova Scotia, Canada a Province that is not only uniquely beautiful and engaging for visitors but one that also has a strong maritime heritage not only as the focus of North Atlantic fishing for 200 years but also as the home of Canada’s most famous racer- the Bluenose.

We are proud to announce that in November 2021 to celebrate 100 years since the laying of the Bluenose’s keel our Open 60 ‘Nova Scotia 1’ skippered by Spartan founder Chris Stanmore-Major, will set off to challenge for the toughest record in offshore sailing; The outright record for sailing West, Solo, Non-stop, Around the World.

The record for sailing East around the world has had hundreds of competitors over the years and is the standard route for a number of round the world sailing races such as the Vendee Globe and Velux 5 Oceans Race.

Sailing East involves sailing with the planet’s prevailing winds & currents; sailors would expect approximately 66% of the wind they deal with to be pushing them in their direction of travel.  This has lead to the outright record for the ‘Clipper Way’ (the nickname for the route East around the world) being just 40 days 23 hours 30 minutes.

The nickname for the route Chris will take is, ‘The Impossible Voyage’ and to date, only 5 sailors (7 fewer people than have walked on the moon) have ever successfully completed this challenge.

‘Nova Scotia 1’ – The Fastest Upwind Boat in the World

‘Nova Scotia 1’ was designed specifically to be sailed by just one person and is a study in resilience and advanced sailing engineering.  Unlike most Open 60’s (designed primarily to compete in the Vendee Globe racing East around the world with 66% of the wind behind the boat) the ‘Nova Scotia 1’ was optimized to sail upwind, against the wind and every conceivable element of her construction and design is intended to make her as safe and as powerful as possible when going upwind in extreme conditions. Read more

As mariners will be aware the waters of the Atlantic Canadian coast are some of the most challenging in the world. In this crucible some of the most and skilful sailors the world has ever seen have cut their teeth; indeed the phrase ‘Wooden Ships & Iron Men’ speaks of the hardiness and tenacity of the mariners of Nova Scotia. The vessels that conquered the infamous North Atlantic had to be just as tenacious and stalwart as those that sailed aboard them and none was quicker or more famous than the mighty Bluenose.

Bluenose ‘ The Queen of The North Atlantic’

No vessel better epitomizes the seafaring prowess of Nova Scotia than the ‘Bluenose’.  This is a vessel so famous that she is depicted on the Canadian 10 cent coin and she was the first non-living entrant to the Canadian Sporting Hall of Fame.  Her keel was laid in Lunenburg in 1920 and although she was a fully operational fishing schooner she had a little South Shore know-how weaved into her lines that made her a racing legend.

Notably, as well as landing the largest ever catch for a fishing schooner Bluenose participated in every edition of the ‘International Fisherman’s Races’ (equivalent at the time to America’s Cup) and had an incredible racing career that spanned seventeen years and only ever saw her beaten once. The Halifax Herald Fisherman’s Trophy still resides in Lunenburg, a reminder of the Province’s age of pride. 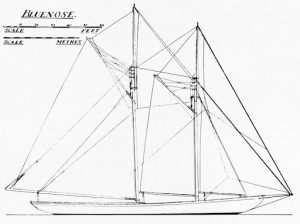 Having sailed from a young age, Chris (better known as CSM in the press) started his career on tall ships working for Outward Bound in Hong Kong aged 18.   His first circumnavigation was in 2009 as the skipper of ‘Qingdao’ a 68ft sloop racing around the world with a crew of 20 in the Clipper Race. Just 8 weeks after returning from that race he set off on his second rounding of the planet, this time solo on the Open 60 ‘Spartan’ (sister ship to the ‘Nova Scotia 1’) in the 2010 Velux 5 Oceans Race, coming 4th overall.

Since then Chris moved to Nova Scotia and found somewhere he is truly passionate about and can really call home. As he says himself, ’20 years living out of bag as a professional sailor, it took only 24hrs to decide to swallow the anchor and make Nova Scotia my home’.

He set up Spartan Ocean Racing & Training in Lunenburg, Nova Scotia in 2015, providing international sailors of all ages and skill levels with the opportunity to cross oceans, enter world-class regattas and develop their seamanship in a safe, supportive environment.

If you would like to support the fundraising that is necessary now to buy the last few components to allow the ‘Nova Scotia 1’ to set off around the world in October please consider becoming a patron here on Patreon.